What is LitRPG? LitRPG fills a specific subset of other genres, such as its cousins fantasy and sci fi. However, most would already know the basic plot for stories in these genres. It typically involves a hero with a humble beginning, developing his/her abilities, and finally defeating the main antagonist in the end.

This template is often called the “hero’s journey.” Thankfully, as a fan, the interest is not the destination, rather than the journey. It’s the reason why the genre is still popular even if the fundamental plot is already known. But what if there’s a way to breathe new life into this method of presenting the story? Well, LitRPG is a relatively new genre that aims to do that. 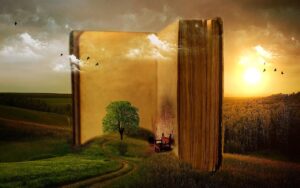 LitRPG – What Is It?

LitRPG is short for Literary Role-Playing Game. It’s a relatively new fiction genre that typically combines the traditional narrative plotlines with digital role-playing games. Typically, LitRPG tells a story about a protagonist that knows he is in a virtual world. The protagonist then has to do quests or overcome challenges while adhering the rules of the virtual world.

Imagine reading a story of a boy playing World Of Warcraft. The setting is in the future, so the boy can fully immerse himself in the virtual world. Suddenly, the game locks in the boy in the virtual world and his avatar. He can’t get out of the game and back to his body unless he overcomes a certain challenge within the game. Now you are interested to know how the boy achieves this. Basically, this is what LitRPG is all about.

Keep in mind that this is just an oversimplified presentation or definition of LitRPG. The truth is, there’s no strict or general consensus of what encompasses the said genre.

Looking for some examples? Check out one of our lists for the top deals on LitRPG.

A Bit Of History

One could argue that LitRPG hit the mainstream around ten years ago. However, the basic fundamentals of the genre could have been around for more than thirty years.

The rise of Massive Multiplayer Online Role-Playing Games (MMORPG) in the 1990s was a significant factor for bringing LitRPG to the general public. While the genre could have a long history, but the term LitRPG may have originated during a brainstorming session back in 2013. The term was given birth by three major figures from EKSMO, a major Russian publishing company.

The LitRPG’s thematic spectrum is vast and exciting enough to satisfy your literature cravings. Whether the protagonist is a mystic, a gunslinger, or whatever it is you are looking for, there’s a good chance that there’s a LitRPG that will fit the bill. With so much an author can play around like setting, purpose, game mechanics, or plotline, the sky is the limit with the LitRPG. Having said that, below are perhaps the most common themes:

* Builder – the protagonist takes on an active role in constructing a dungeon, settlement, or base where the main story is contextualized.

* Crafting – the hero engages in a quest to imbue an artifact or weapon with special powers or enhancements.

* Harem – usually an adult theme in which the protagonist’s story centers around characters that are sexually stimulating.

* Dungeon-core – the majority of the story unwinds in a dungeon or a similar setting.

* Grimdark – the merger of a horror genre and the virtual world.

As mentioned before, the boundaries of what encompasses the LitRPG genre are not very well defined. However, most of its supporters or proponents would agree that a LitRPG must have:

* Meta-Awareness – the main protagonist must be completely aware that they are in a virtual world. Some stories will unfold that the protagonist got into the virtual world by intention, while some got there accidentally. The bottom line is that the antagonist knows that he is not in the “real” world but rather in a virtual setting.

Just like the example mentioned above, you are reading about a boy playing an MMORPG. Then, he gets trapped inside the game and can’t get back to his body until he completes a challenge or quest.

In this example, the boy knows that he is not in the real world. If the protagonist doesn’t know that he is in a virtual world, most would agree that it’s no longer a LitRPG.

* Protagonists Progression – in traditional stories, after the protagonist overcomes a challenge, the readers know that he or she became wiser, stronger, or both. In LitRPGs, it’s usual for the novel to elaborate this further in detail. For example, the protagonist mage just defeated a fearsome dragon. After that, you’ll then read something like “Level Up! New Ability Learned – Blizzard”

Wrapping It All Up

LitRPG is a relatively new way of literary storytelling. It attempts to give the old template of the “hero’s journey” a new twist.

If you are reading this, then it’s likely that you have played a role-playing game at least once. One of the reasons why RPGs are fun to play is because they transport you into a different world with their own set of lore and rules. All RPGs have a form of character progression like new skills, stat allocation, or leveling up. In the future, RPGs are likely to be fully immersive, which means your senses can fully integrate into the virtual world. Now, here’s the fun part.

Imagine you are playing a fully immersive RPG. As your character progresses through the world, there’s a story that almost everyone mostly doesn’t notice. And, that story is about you playing your character in the RPG game.

Now imagine an author writing down your story as you progress through the game. At its core, that’s what LitRPG is all about. This new storytelling approach appears to be successful in carving a place of its own in the realm of sci-fi and/or fantasy genre.

No comments to show.

How to Write a Play